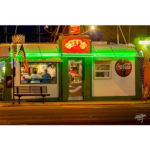 Beefy’s inhabits a 400-square-foot diner installed in 1947 on South Virginia Street in Midtown. From these modest digs, Beefy’s goes big. With jaw-unhinging burgers, sandwiches and dogs, plus wings, milkshakes, craft beer, and a wine list of half bottles to pair with that two-patty four-cheese Awesome Awesome burger.

Owner Roy Brennan got his start at 18 in his family’s tavern back in Jersey. Forty-two years later, “there are very few jobs I haven’t done in hospitality,” he says.